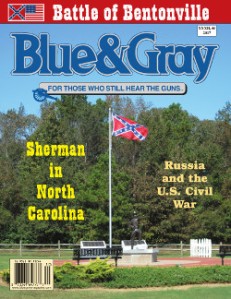 The line of blue infantry crested the hill just as the officers gave the order to halt. Men caught their breath and then looked to their weapons in anticipation of resuming the fight. As his men enjoyed a few minutes of rest, Maj. Gen. Joseph A. Mower took stock of the situation. A veteran of Corinth, Vicksburg and the Red River Campaign, Mower had watched as his division shattered the thin Confederate left flank. He was now well beyond the Union position.

Mower stood poised to push even farther and inflict more damage in the enemy’s rear. Through the course of the attack, his brigades had lost cohesion, and he had been forced to break off the advance. The pause was fatal. Suddenly, in the distance, a line of infantry in ragged gray and butternut appeared, bearing down on their foe. Mower’s opportunity had withered away.

The John and Amy Harper house on the Bentonville battlefield.

On February 1, 1865, the U. S. army group commanded by Maj. Gen. William T. Sherman was once again underway. Following his march across Georgia to Savannah in the later months of 1864, Sherman envisioned a similar operation through the Carolinas. Such a march, Sherman believed, threatened Gen. Robert E. Lee and the Army of Northern Virginia. Lee was locked in a siege defending the Confederate capital at Richmond and the critical rail hub at Petersburg in Virginia. Sherman recognized the advantage of taking a position in central North Carolina so as to cooperate with Union forces in that state. “The game is then up with Lee, unless he comes out of Richmond, avoids you and fights me,” Sherman wrote to Lt. Gen. Ulysses S. Grant outside of Petersburg.

For the march, Sherman kept the same designations as he had in Georgia. Maj. Gen. Oliver O. Howard’s Army of the Tennessee made up the Right Wing, and Maj. Gen. Henry W. Slocum’s Army of Georgia served as the Left Wing. Once again, Howard and Slocum were to make the expedition without a constant source of supply. Their men were to gather as much sustenance as possible from the surrounding countryside. When he reached North Carolina, Sherman intended to resupply his men at Goldsboro, where provisions and equipment could be brought from the city of New Bern by the railroad. In order to secure and protect this supply route from the Atlantic, Grant ordered Maj. Gen. John M. Schofield’s XXIII Corps transferred from Tennessee to operate along the North Carolina coast and push inland. In doing so, Schofield could rely on Brig. Gen. Alfred Terry’s Union force, which had recently captured Fort Fisher south of Wilmington. While Sherman’s force totaled a little over 60,000 seasoned veterans, he was once again undertaking a great risk in moving through the Carolinas. By relying primarily on the land, he could ill afford to remain stationary during the march, which meant that he had to avoid any prolonged engagement.

Although his men had to navigate the flooded South Carolina swamps, Sherman, with Howard, reached Columbia on February 17. His progress had alarmed the Confederate high command. To Robert E. Lee, something had to be done to slow Sherman’s advance. Two days after the Federals reached the South Carolina capital, Lee wrote to Secretary of War John C. Breckinridge, that a general officer be placed in command to confront Sherman. “Gen. J. E. Johnston is the only officer whom I know who has the confidence of the army,” Lee wrote to Breckinridge. “If he was ordered to report to me, I would place him . . . on duty.” 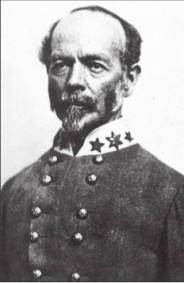 Joe Johnston had fought Sherman before. He had commanded the Army of Tennessee in the spring of 1864 and opposed the Union general’s bid to capture the city of Atlanta. Unhappy with the progress of the campaign, President Jefferson Davis relieved him from command in July 1864. Now, with few alternatives, President Davis was forced to approve Lee’s request. On February 23, Johnston, who was then in Lincolnton, North Carolina, received a telegram from Lee. He was once again given command of the Army of Tennessee as well as the Department of South Carolina, Georgia and Florida. Lee’s directive to his subordinate was to “concentrate all available forces and drive back Sherman.”

A heady task lay before Johnston. He had to assemble a command from troops scattered throughout the South. The centerpiece of Johnston’s new force was the remnant of his old Army of Tennessee. Devastated from the Battles of Franklin and Nashville the previous year, these men had been ordered from their winter encampment in Mississippi to the Carolinas. Despite their recent losses in Tennessee, Johnston’s appointment buoyed the spirits of his former command. “General Johnston was asked to take command of this little squad of half-clad and fed soldiers and try to put them in fighting shape again as he used to have them,” wrote an Arkansas soldier. “Most everybody would have said it was an impossibility, but as soon as it was known that Johnston had agreed to take command again, you could hear men all over the camp saying they were willing to go anywhere under
Johnston.” Also at his disposal was Lt. Gen. William J. Hardee’s garrison from Charleston, South Carolina, which was then rapidly making its way north from the abandoned city. 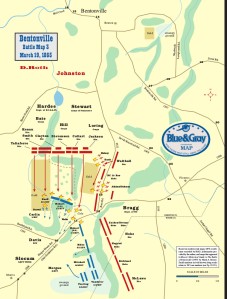 Meanwhile, General Sherman continued his advance from Columbia. From there, his men marched to Alston and on to Winnsboro where Slocum and his wing had already arrived. Turning east, Sherman headed for Cheraw. He had received the news that Johnston had been restored to command and bargained he would face him again in battle. Nevertheless, his columns trudged on from Cheraw toward Fayetteville, North Carolina. Johnston also had his eyes on Fayetteville from his headquarters in Charlotte. The city gave him a better place to observe Sherman’s progress and Johnston arrived there on March 4. Before he left Charlotte, he ordered the elements of the Army of Tennessee moving to join him to the town of Smithfield, North Carolina

Additionally, he was able to transfer Confederates under Gen. Braxton Bragg in the Department of North Carolina to his command. Johnston also recognized the vulnerability of Sherman’s columns. He planned to strike one of Sherman’s armies while it attempted to cross the nearby Cape Fear River. He was, however, unable to put his plan into motion. With only Hardee’s token force to contend with the enemy, Johnston prudently abandoned the city to the Federals on March 11 and withdrew northward.

Ahead of the blue infantry, Bvt. Maj. Gen. Judson Kilpatrick’s cavalry division ran into elements of Lt. Gen. Wade Hampton’s cavalry at Monroe’s Cross Roads on the 10th. Sherman’s arrival in Fayetteville allowed him to give his soldiers a much needed rest before they began the final leg of their march to Goldsboro. “The army is in splendid health, condition and spirits,” he wrote to Grant the day after he reached Fayetteville. Sherman also surmised that Johnston may try to block his path to the northeast, but believed that a Confederate withdrawal to Raleigh was more likely. Johnston, despite his inability to fight Sherman on the Cape Fear, was still planning to strike the Federals. He had instructed Bragg to rendezvous with the Army of Tennessee at Smithfield.

After the brief respite, Sherman was once again ready to resume his march. By March 15, both of his armies were across the Cape Fear River and the Union soldiers trudged on toward Goldsboro. Sherman himself rode with General Slocum’s wing on the road to Raleigh. It rained throughout the course of the day. The next day, Sherman found Hardee’s entire force in position just south of the crossroads town of Averasboro.

**BENTONVILLE BATTLE MAP TITLES**— Each Map in Blue & Gray is placed on the page in several layers. During our review of the printer’s online digital proof prior to printing, we noticed the three two-page Battle Maps were marred by stray lines and marks. In the process of correcting the matter, the titles of those Maps were sent to a different layer and, unfortunately, did not print. The titles should have appeared as follows: