In the late spring of 1863, the situation was growing increasingly dire for the embattled Confederate bastion at Vicksburg, Mississippi. Union General Ulysses S. Grant’s Army of the Tennessee, after audaciously cutting its supply lines to live off the land, had maneuvered some 31,000 Confederate soldiers into their earthworks at Vicksburg and was slowly starving them into submission, with unfettered access of the Mississippi River as the prize.

Desperately seeking any means of relieving pressure on Vicksburg and its garrison, Confederate Secretary of War James A. Seddon on March 23, 1863, urged troops west of the Mississippi to strike at Union forces there, noting that an “attack on, and seizure of Helena, while all the available forces of the enemy are being pushed to Grant’s aid,” could “secure great future advantage to the Confederacy.”

One hundred and four days later, Seddon’s suggestion would result in one of the signature defeats of Confederate arms in Arkansas on the very day that Vicksburg fell.

The Helena, Arkansas, waterfront on the Mississippi River looking northeast.

At the outset of the Civil War, Helena was a thriving Mississippi River port serving one of Arkansas’ richest agricultural regions, and when the war began the town supplied such luminaries as Patrick Cleburne and Thomas Hindman to the Confederate cause. By the middle of 1862, though, Helena was a Union base, having been occupied by Maj. Gen. Samuel Curtis’ Army of the Southwest in July after an epic campaign that started with the Battle of Pea Ridge in early March. Following that northwest Arkansas battle, Curtis had briefly threatened Little Rock before cutting his supply lines and marching across eastern Arkansas to establish a stable base amid the towering loess bluffs at Helena. The Federals were not alone when they reached Helena on July 12: thousands of slaves had followed the army, seeking new lives of freedom, and “contraband” camps were established for the refugees even as Union officials struggled to determine what to do with the newly liberated blacks. One Iowa soldier observed that the Federals “have brought in negros by the hundred . . . have them do all our dirty work & they are well satisfied at that but some of the women & children look pitiful. They have had a hard row to hoe for a long time, have been hid out in swamps with mules & cattle some times.”

Though they were glad to have the luxury of a riverine supply line, the Yankee troops soon grew to hate Helena as increasing numbers of men fell ill at the unhealthy location. George Flanders of the 5th Kansas Cavalry wrote to his mother that, “I have no fear of being hit by the bullets, but I can’t help dreading spending the summer in this sickly location,” while a Wisconsin captain barred his wife from visiting him: “It is almost sure death to at least 1 out of 3 of all unacclimated persons who come here, except late in fall or in winter.” Another Kansan sourly called Helena “one of the most miserable low down locations in the whole universe,” but Iowan Charles Musser may have best summed up the typical Union soldier’s feeling toward Helena when he wrote, “I hope when we leave this place it will . . . Sink down and the Waters of the Old Mississippi cover it so deep that no lead can Sound the bottom.”

In the summer of 1862, Helena was the only Federal enclave in Arkansas and Confederate cavalry began patrolling the area aggressively, snatching up pickets and skirmishing with Union cavalry. While field artillery and Federal gunboats patrolling the Mississippi provided a measure of security, it was obvious that more permanent fortifications would be needed.

In late August, construction began on what would become the main defensive earthwork in the town, with Gilbert Denny of the 18th Indiana Infantry writing on August 24, “We are building a fort here. There is 6 pieces of artillery here for it from 32 to 64 pounders. The Negrows is doing the work while we lay in the shade and drill.” Construction continued into the fall and on October 29, Hoosier S. C. Bishop reported, “This has been a gay day with us, a grand review of all the troops and a general salute fired by all the Artillery and Gunboats in honor of the ‘Fort’ which is now finished.” The impressive fortification, located on the northern outskirts of town, was named Fort Curtis in honor of the Union commander and was armed with two 32-pound and five 24- pound siege guns—a serious deterrent to any potential attackers.

Despite the impressive fortification, Helena was still potentially vulnerable to Confederate attack. The town is located at the southern terminus of Crowley’s Ridge (an erosional loess remnant created when the Mississippi and Ohio Rivers fought for their permanent channels) that towers over the region’s flat Delta landscape. At least four high points dominated Helena—and thus Fort Curtis—and those points became the focus of further fortifications. Capt. John F. Youngs of the 5th Kansas Cavalry noted on September 29, 1862, “Entrenchments are being thrown up on the high ground north of Helena[.] Contraband darkeys employed on the works.” 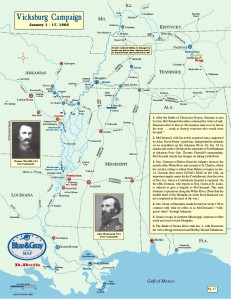 Helena’s fortification would begin in earnest in early 1863 when Maj. Gen. Benjamin Mayberry Prentiss took command of the District of Eastern Arkansas. Prentiss had made an obstinate stand in a sunken road remembered as “The Hornet’s Nest” at the Battle of Shiloh the previous spring, where he was captured. He was determined that a similar fate would not befall the Union garrison at Helena.

The construction would receive added assistance, and the construction workers a new status, in the spring of 1863 as Union leaders followed January’s Emancipation Proclamation with an effort to bring some of the tens of thousands of black men in the contraband camps surrounding Federal bases into military service. President Abraham Lincoln tasked Brig. Gen. Lorenzo Thomas, the army’s adjutant general, with visiting the U. S. bases in the Mississippi River Valley and recruiting regiments of black troops, and historian Noah Andre Trudeau observed that “the old bureaucrat took to the stump like a bornagain preacher.” Thomas arrived at Helena on April 6 and addressed some 7,000 Union troops there: “I am here to say that I am authorized to raise as many regiments of blacks as I can. I am authorized to give commissions from the highest to the lowest; and I desire those persons who are in earnest in this work to take hold of it.”