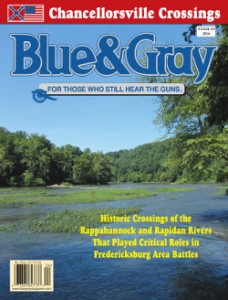 Back in 1983 when Blue & Gray was founded, I never thought there would be a “General’s Tour” requiring anything but a dependable vehicle with a full tank of gas, good hiking shoes (boots preferred), and a proper functioning odometer. Also, since that kind of touring by its very nature had to be what I termed “turf-bound,” it was pretty clear that oceanic naval operations would not become Tour features.

That notion was proven false when our Mobile Bay issue was a big success in 2002. Now, Erik Nelson, whose past feature on the Battles of 2nd Fredericksburg and Salem Church was well received, has gone a long way to prove that a “General’s Tour” of Civil War era riverine sites, without road access, can become a reality.

Anyone who has delved into Fredericksburg area battlefields, such as the December 1862 fight, followed in the spring of 1863 by Chancellorsville, then in 1864 with the opening of the Overland Campaign, has seen on maps the locations of the three Rappahannock River pontoon bridge sites along the town’s waterfront; also the upriver crossings at Banks’ Ford and United States Ford, and maybe even the more obscure names Scott’s Ferry, and Scott’s Mill and Dam (there were two Scott’s Mills). Even more obscure are river crossing places at Ellis’ Mill and Richards’ Mill.

The good thing is that these obscure sites are actually on public land and can be visited. The problem is, they are land-locked by private property, so can not be driven to with your B&G in hand and its listing of GPS coordinates to guide you along the roads. But that’s a problem no more—if you have a canoe. Erik wrote this issue’s Tour, wherein he gives information on how to obtain a canoe, complete with arrangements for drop off and return.

Full disclosure: When I visited with Erik in mid-March, when the foliage was sparse, he had cleared our visits to the various sites with property owners. We also had with us Fredericksburg Police Department’s Lee Sillitoe, Watershed Manager, who is deputized as such in surrounding counties. We drove to the sites in Lee’s official law enforcement vehicle or hiked to them (do not trespass). I was never in a canoe. Erik, though, has visited the sites by canoe many times. His Tour provides pertinent information about where to land and any obstacles to avoid.

From: Eastern Theater Issues, Editor's Letter
← Sneak Preview
Historic Crossings of the Rappahannock and Rapidan Rivers (Volume 32 #3) →
No comments yet