The Battle of Cedar Mountain

An excerpt from the current issue: Volume 32, #2

The Battle of Cedar Mountain

The Battle of Cedar Mountain has never been considered part of a campaign. Many will place the fight as the opening action of the Second Manassas Campaign. However, the fight south of Culpeper, Va., on August 9, 1862 was, if anything, the concluding action of the Peninsula Campaign.

The Lincoln Administration needed to create a distraction for the Confederate armies on the Virginia Peninsula below Richmond—a distraction to relieve pressure on Maj. Gen. George B. McClellan’s Army of the Potomac so his troops could withdraw from their pocket along the James River.

The creation of the Federal Army of Virginia under Maj. Gen. John Pope and its movement south toward the rail junction of Gordonsville forced Gen. Robert E. Lee to divide his army in order to mitigate the threat Pope was creating. Maj. Gen. Thomas J. “Stonewall” Jackson (right) with three divisions was dispatched to Louisa and Orange Counties to meet the threat, and if the opportunity presented itself, to strike Pope. Jackson would do that, and with his victory at Cedar Mountain set the stage for Lee’s first invasion of the North. 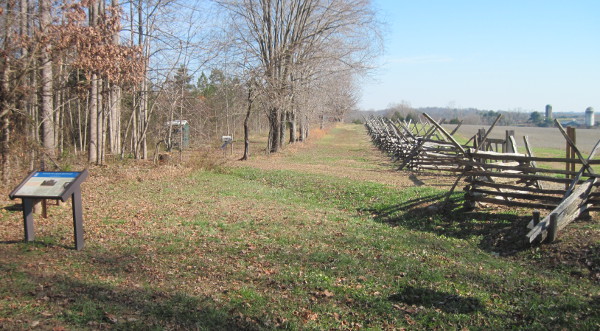 Cedar Mountain Battlefield Park at Culpeper, Virginia. The historical marker is for the Crittenden Gate. The view is looking north along the wartime trace of the main road connecting Culpeper and Orange.

Following the Confederate victory in the Seven Days Campaign outside Richmond, Lee looked to the strategic offensive, taking the fight away from the capital city where he could maneuver and defeat the Federals as far from Richmond as possible. The Confederate army under Gen. Joseph Johnston had spent the spring of 1862 successfully maneuvering to keep George McClellan out of Richmond. Before Lee, who succeeded Johnston in command after his wounding in late May, could move away from Richmond, he needed to secure his supplies and mitigate any immediate threats.

The supplies for the Army of Northern Virginia and Richmond principally came on the Virginia Central Railroad from the Shenandoah Valley. The vital link passed through Gordonsville in Orange County. Gordonsville was more than a junction of the Virginia Central and Orange & Alexandria railroads; it was the second largest rail yard after Richmond. It was an industrial town with shops, warehouses and stock yards. There was a receiving hospital at the Exchange Hotel, which over the course of the war would see more than 70,000 pass through its doors. Its loss would not only deny the Confederacy the industry around Gordonsville, it would cut off the Shenandoah Valley and its agriculture from the capital. For Robert E. Lee, controlling Gordonsville was the key to any potential offensive action in northern Virginia.

The Federal threat in front of Richmond was lessened and McClellan and his Army of the Potomac were effectively contained along the James River. The Yankees were in a good defensive position with the weight of the Federal James River Fleet guns protecting it, out of Lee’s reach. More importantly, the Federals were not capable of offensive action. But a new threat to the Army of Northern Virginia emerged. On June 27, while Lee was defeating McClellan at Gaines’ Mill, Maj. Gen. John Pope was given overall command of three separate Federal forces under Maj. Gens. John C. Frémont, Nathaniel P. Banks and Irvin McDowell.

Pope arrived in Washington from the Western Theater where he had success at Island No. 10 and Corinth. Lincoln, longing for a winner in the East, hoped Pope would be the answer. Forty at the time of the campaign, John Pope was an 1842 graduate of West Point and won two brevets during the Mexican War. He remained in the army and in 1861 was promoted to brigadier general of volunteers.

Pope’s first day as commander of the Army of Virginia was John Frémont’s last. He submitted his resignation not wanting to serve under Pope, who in Frémont’s mind was “subordinate and inferior.” Maj. Gen. Franz Sigel replaced Frémont, taking command of the I Corps on June 30.

On July 31, Pope’s army numbered nearly 56,000, but was spread across a wide area of northern Virginia. Banks and Sigel were in Middletown, Va., south of Winchester in the Shenandoah Valley, and McDowell was camped near Warrenton.
Pope spent his first few weeks in Washington organizing his command. By the middle of July, it became apparent to the Lincoln Administration that McClellan’s army must withdraw from the James River, and the threat to the Army of the Potomac needed to be reduced to safely remove them. Pope was ordered by Maj. Gen. Henry W. Halleck, Lincoln’s new General-in-Chief in Washington, to demonstrate against the enemy and to push across the Rappahannock River, occupy Culpeper and threaten Gordonsville.

According to General Pope: “On the 29th of July, I left Washington, and after reviewing [Brig. Gen. James] Ricketts’ division, of McDowell’s corps, at Waterloo Bridge, repaired to the headquarters of General Banks, a few miles southeast of Little Washington. . . . I instructed General Banks to move forward on the 7th of August and take post at the point where the turnpike from Sperryville to Culpeper crosses the Hazel River.”

Lee, who had been observing the organization of the Union Army of Virginia, recognized that any movement by Pope toward Culpeper was a threat to his supply line and his rear. Accordingly, on July 13, Lee dispatched Jackson’s Army of the Valley with two divisions to Louisa Court House and, if practicable, to Gordonsville to oppose the advance of the enemy. Jackson, though operating under Lee’s direction, was not yet part of the Army of Northern Virginia. Jackson marched with Maj. Gen. Richard S. Ewell’s division and the Stonewall Division under Brig. Gen. Charles Winder

To Continue Reading this Issue, Click Here to Purchase

From: Eastern Theater Issues
← Editors Letter: The Making of A Legend
Sneak Preview →
No comments yet