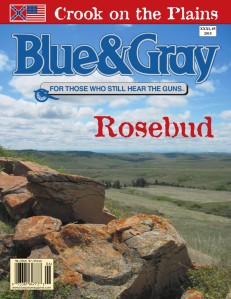 An Excerpt from the current issue: Volume 31, #5

Civil War Rivals George Crook and George Custer, and the Beginning of the Great Sioux War, 1876

Within a year of the surrender at Appomattox Court House, Va., nearly one million men had been mustered out of the volunteer ranks of the U. S. Army. In July 1866, President Andrew Johnson signed a measure limiting the new standing army to 54,302 officers and men. Over the next eight years the size of the army was reduced three more times, until it numbered just 30,000 enlisted men in 1874. And, in July 1870, Congress ordered that the grades of general and lieutenant general be abolished upon the retirement of William T. Sherman and Philip H. Sheridan. That bill also reduced the number of major generals to three and set the limit for brigadiers at six. Competition for these nine appointments, especially the brigadier positions, would be fierce, though the chance for promotion of any kind in the post-Civil War army would be depressingly low.

Thus, October 29, 1873, must have been a momentous day for George Crook, for on that day Crook was elevated from lieutenant colonel to brigadier. Still, in his autobiography, Crook said nothing about the promotion and with some reason: it was an almost unheard of rise in grade in the postwar army “that outraged the officers thus ranked and left a legacy of rancor against Crook that persisted for years.”

Upon graduation from West Point in 1852, George Crook was assigned to the 4th U. S. Infantry. As a young subaltern he served principally along the California-Oregon border, and in Washington Territory. Returning east following the outbreak of the Civil War, Crook was appointed captain in the 14th U. S. Infantry, before opting to enter the rapidly expanding volunteer service. He sought out both Robert Schenck, who had appointed him to the Military Academy, as well as Ohio Gov. William Dennison. With their help he garnered an appointment as colonel of the 36th Ohio Infantry.

Now in command of a regiment, Crook determined to let others speak on his behalf as he sought continued advancement. As one supporter later told Secretary of War Edwin M. Stanton, “Crook . . . will never [pursue] his own claims.” On September 7, 1862, Crook’s subordinate, Lt. Col. Ebenezer Andrews, approached Secretary of the Treasury, and former Ohio governor, Salmon P. Chase, on Crook’s behalf. Chase then spoke with both Stanton and General-in- Chief Henry W. Halleck, and Crook was promoted to brigadier later that day.

In November 1863, a friend termed Crook “the most modest retiring unassuming man I have ever met with.” The following July the same man, writing to Stanton on Crook’s behalf, stated, “he talks but little. . . . He is a silent man.” Admirers saw in Crook “the power of making his men believe in him.” Others saw a man who often clashed with superiors and subordinates alike. Historian Scott Patchan has speculated that Crook may have found colorful, outgoing officers “intimidating.” Rutherford B. Hayes, Crook’s subordinate and close friend, judged Crook “the best general I have ever known,” but he also recognized that Crook “was not adept at expressing himself,” a clear flaw for a commanding officer. Patchan concluded that Crook “lacked those vital interpersonal skills needed to coordinate his army.” These deficiencies “may have hindered his effectiveness as an army commander and exacerbated rifts with subordinates.”

Crook may have been willing to let others speak for him, but he demanded that he be given credit for the battlefield successes that he believed he had achieved. He resented the recognition given to others following the final assault across the Rohrbach (Burnside’s) Bridge at Antietam, even though his own leadership at the bridge had been less than inspired. He clashed several times with Phil Sheridan, his close friend and former roommate at West Point, during the 1864 Shenandoah Valley Campaign. At both Opequon (3rd Winchester) and Fisher’s Hill, Crook believed he had suggested the plan and/or delivered the attack that carried the day. But Sheridan not only refused to publicly credit Crook, he allowed others to garner the headlines.

One of the officers overshadowing Crook in the headlines was George A. Custer, one of the most colorful, outgoing men in the service. As such he was the antithesis of Crook. He was also a rival and would remain so in the postwar army. Crook mentioned Custer only once in his autobiography. Referring to the fighting at Sailor’s Creek on April 6, 1865, Crook complained that Custer again reaped unearned acclaim at his expense. It was reported that Custer’s division had gained the victory “and turned in more prisoners and battle flags than any of the cavalry,” when Crook believed Custer “probably had less to do with their surrender than any of the rest of us.” The weight of evidence belies Crook’s account. Historian Chris Calkins credits “Custer’s final charge” with breaking the Southern line, while Custer biographer Gregory Urwin charges that Crook lied in his autobiography when he denigrated Custer’s contribution. “Crook’s version,” in Urwin’s view, “stands at odds with nearly every other eyewitness report of the battle—official dispatches and the reminiscences of both Confederate and Union participants included.”

That Custer was a fellow Ohioan meant nothing to Crook, who, like many others, had little use for Custer’s ostentation. Custer’s success and personality drew reporters to him like moths to a flame, and the young general did nothing to dissuade them. He reveled in the pomp and pageantry of the military, while Crook recoiled from it. By April 1865, the two men had been fighting together for months, and Crook, still fuming over the slights delivered months earlier by Sheridan, “must have [been] particularly galled” by the attention Sheridan showered on Custer following the surrender at Appomattox.