Sherman in North Georgia: The Battle of Resaca

An Excerpt from the current issue: Volume 31, #4

Sherman in North Georgia:
The Battle of Resaca

As the war entered its third year, the North seemed on the verge of victory. By early 1864, Union armies had conquered and were occupying large areas of Confederate territory, including most of Tennessee, Arkansas, Louisiana and the vital Mississippi River valley. Moreover, Northern forces, with their superior strength, held the initiative on all fronts. Confederate armies were now too weak to launch the giant raids led by Braxton Bragg into Kentucky in 1862 and by Robert E. Lee into Pennsylvania in 1863. By these indices, the North was winning the war, and would triumph at its end.

In the distance is Snake Creek Gap viewed from the east near the Fite house. The gap was the key to James McPherson’s forces in their objective of outmaneuvering Joe Johnston’s Confederate army, which was then confronting William T. Sherman’s forces at Dalton, Georgia.

But then, maybe not. The Southern people, despite much sacrifice, showed no sign of wanting to give in. Furthermore, the Confederacy’s two largest armies remained tough and full of fight. Though reduced in size and weakened by the loss of some of its most talented officers, Lee’s Army of Northern Virginia guarded the Confederate capital of Richmond, defying the Yankee Army of the Potomac to come and get it. “Every soldier feels as confident of success as if we had already achieved it,” wrote Lt. Robert Tutwiler of the 15th Virginia Cavalry in late April. 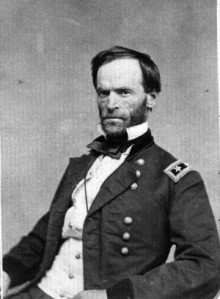 On the war’s other main front, which had shifted into north Georgia by spring 1864, Gen. Joseph E. Johnston’s Army of Tennessee had recovered from its disaster at Missionary Ridge and was poised at Dalton to resist the enemy’s next advance, presumably against Atlanta, which was by now the Confederacy’s second-most important city. “The men are better clothed, better shod, better equipped and armed, than they have been,” judged Brig. Gen. Clement H. Stevens, writing on April 19, just weeks before the onset of the spring campaign season.

Looming over the war map was a political atmosphere which further threatened the Union war effort. After the deaths of a quarter-million of their young men and with the rebellion still not crushed, many Northerners had become disheartened by the war. A lot of them were Democrats who openly favored an armistice with the Rebels, allowing Southerners reentrance to the Union without emancipation of slavery, or perhaps granting them the outright independence they had fought so hard for. This “peace faction” was large enough to worry President Abraham Lincoln, who was preparing to run for re-election in the fall on a platform based on continued prosecution of the war. Lincoln, the political pragmatist, recognized that his Democratic opposition would play to the peace faction and make continuation of the war the centerpiece of the presidential campaign. For Lincoln to win reelection in November 1864, Northern armies had not only to defeat Lee or Johnston; they had to achieve some headline-grabbing accomplishment, like the capture of Atlanta. Only then could Lincoln and his supporters point to the certainty of Union victory. Without such proof, Lincoln could lose and the Democratic president would likely enter truce talks with President Jefferson Davis’ Confederate government.

These were the stakes in the spring of 1864, and Southerners recognized them. If Lee held out in Virginia and Johnston held out in Georgia—no matter what else happened in the other, smaller theaters—the South could win its independence simply by not losing it. After all, that was precisely how George Washington and America’s first revolutionaries had won theirs.

Grant and Sherman had risen to become the North’s two most important and arguably most successful generals. Graduates of West Point, both had left the old army in the 1850s, fizzled in civilian life, and accepted Union commissions after Fort Sumter. Grant became the North’s first war hero with his electrifying capture of Forts Henry and Donelson in early 1862. Two months later Maj. Gen. Grant commanded the Federal Army of the Tennessee, and Brig. Gen. Sherman commanded a division in it. They thus fought at Shiloh and in the Vicksburg Campaign a year later (by then Maj. Gen. Sherman commanded the XV Corps). After Chickamauga Grant was placed in command of the Military Division of the Mississippi— most of the U.S. forces west of the Appalachians. Sherman succeeded him as head of the Army of the Tennessee. Both were at Missionary Ridge in November ’63. Three months after that, when Lincoln promoted Grant to lieutenant general and made him general-in-chief of U. S. forces, Sherman took charge of the military division.

Laying out Union strategy for the spring 1864 campaigns, Grant ordered a simultaneous advance by Federal forces on several fronts. Maj. Gen. George G. Meade’s Army of the Potomac (with Grant really in charge) was to advance against Lee in Virginia. Maj. Gen. Benjamin F. Butler’s Army of the James would advance up the Virginia Peninsula, as Maj. Gen. Franz Sigel’s forces moved up the Shenandoah Valley. Sherman would press Joe Johnston in north Georgia; Grant ordered Maj. Gen. Nathaniel Banks in Louisiana to march on Mobile, Ala. The strategy was calculated to put pressure on the Rebels’ strained war resources and prevent them from shifting troops from one front to the other. It was a smart plan, one which made use of the North’s preponderant military strength, and which could deliver the kind of victory that Lincoln so fervently wanted. 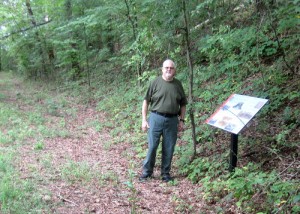 Ken Padgett poses at an interpretive marker along a wartime roadbed in the park. Ken is President of the Friends of Resaca Battlefield and Chairman of the Gordon County Historic Preservation Commission. He has been instrumental in the park’s development.

In late March, Grant had met with Sherman in Cincinnati, and on April 4 wrote out what the two generals had agreed upon: “You [Sherman] I propose to move against Johnston’s army, to break it up and to get into the interior of the enemy’s country as far as you can, inflicting all the damage you can against their War resources.”

Note that in Grant’s orders for the Georgia Campaign there was no mention of the city of Atlanta, though everyone knew it would be Sherman’s geographical objective. An important railroad hub for four diverging lines, and a manufacturing complex with one of the South’s largest iron-rolling mills, the city was also an extensive supply and hospital center.

For his advance on Atlanta, Sherman was assembling near Chattanooga, Tenn., a force of 110,000 men—a group of three separate armies: