Editor’s Letter: The Battle of Resaca 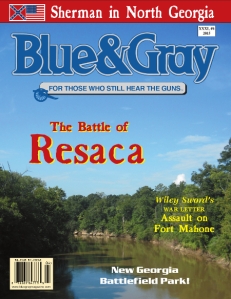 When I visited Resaca, Ga., last September to lay out a Driving Tour and met Ken Padgett, President of the Friends of Resaca Battlefield, he was not convinced he had much of a battlefield to show me. Ken seemed resigned to Resaca’s uncertain fate as he unlocked the gate and motioned me through. It sure looked like a park, with a paved road, historical markers, and an exhibit pavilion. But at that time, the uncertainty of funding hung like a pall over Camp Creek Valley, where Sherman and Johnston struggled during the opening phases of the Atlanta Campaign in 1864.

Since September, according to Ken, “major road blocks” have been resolved between the State of Georgia’s Department of Natural Resources and Gordon County. It’s been a long, hard road. The idea to preserve the battleground at Resaca goes back to 1994, when the Friends of Resaca Battlefield was formed. The initial land acquisition for the 500-plus-acre battlefield park was in 2002, and the official ground-breaking took place in 2008. Perseverance by this grass-roots group of determined preservationists has finally paid off. The grand opening is tentatively set for July.

As of April 6, 2015, it was reported that the new relocated park entrance had been completed, and final touches on signage, a lighted flagpole, and other improvements were underway. Ken has a message for all those concerned about battlefield preservation in general and for Atlanta Campaign enthusiasts in particular:

The Friends of Resaca Battlefield can be contacted at http://www.resacabattlefield.org and by writing them at P.O. Box 1098, Resaca, Ga., 30375