They Fought Like Veterans: Civil War in Indian Territory 2 by Michael Manning

An Excerpt from the current issue: Volume 31, #2 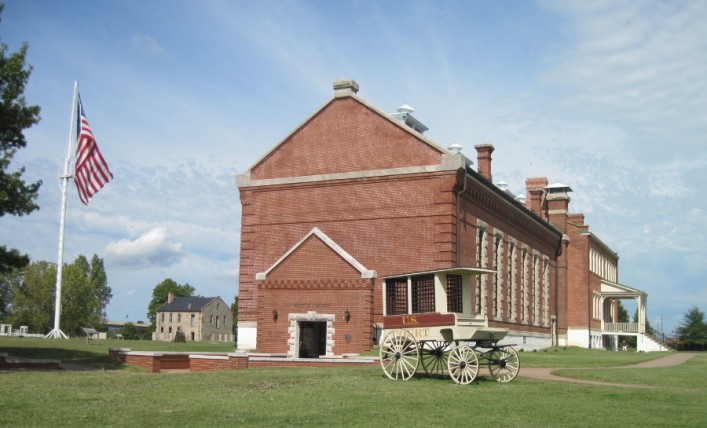 The main building at Ft. Smith has been expanded several times over the years. Today it is the Visitor Center and Museum. During its long career the building has served as a barracks, jail, commissary and courthouse. In the left background is an original commissary building from the Civil War period.

The Five Civilized Tribes consisted of the Cherokee, Creek, Choctaw, Chickasaw, and Seminole Nations. They were considered “civilized” because they differentiated from other Indian nations in that they were semi-autonomous with written constitutions and had established governments and school systems. They also maintained official delegates to the United States Congress. The Nations, especially the Cherokees and Creeks, developed these advanced systems due to their proximity to white communities. Even though they possessed these advancements, the Nations could not overcome the inherent racism or quench the insatiable desire of the Americans for land. As the American settlements, especially in Georgia, pressed against the Indians’ ancestral lands, pressure built to seize their lands and move the Indians west of the Mississippi. The United States Government was split between those who believed in integrating the Indians into white culture and those who wished to separate them, either to give them a chance to integrate at a later date or to maintain a permanent Indian frontier. Few Americans of the early 19th century believed the United States would ever need to settle the lands west of the Mississippi. Although the government treated the Indian nations as autonomous entities, in 1823 the United States Supreme Court ruled that the Indians could “occupy” the lands of the United States, but could not hold title to those lands. The Court further ruled that the Indians’ “Right of Occupancy” was subordinate to the United States’ “Right of Discovery.” This ruling illuminated the sense of supremacy of white culture to that of the Indians. This ruling would have strong repercussions against the Indians who wished only to be left alone. The states of Georgia, Alabama, Tennessee and Mississippi began to include Indian territories into the county divisions and to insist that the Indians abide by state and local laws.

Bowing to the pressure of Georgia’s political machine, in 1830 President Andrew Jackson signed the Indian Removal Act which authorized the president to grant unsettled lands west of the Mississippi in exchange for Indian lands within existing state borders. Earlier, in the War of 1812, a civil war had broken out between the Lower and Upper Creeks. At that time, General Andrew Jackson had been able to develop the Cherokees and Lower Creeks into allies against the Upper Creeks. The resulting Battle of Horseshoe Bend in 1814 broke the strength of the Upper Creeks and brought about their surrender. In an unofficial promise to his Cherokee and Creek allies, Jackson claimed he would protect their rights to remain on their lands in Georgia and North Carolina. Then, less than 20 years later, President Andrew Jackson was the instrument that broke the promise.

On the other hand the Cherokees and Creeks were advanced enough to send legal teams and other prominent leaders to Washington to challenge the Indian Removal Act. Many prominent American leaders including Henry Clay and Chief Justice John Marshall supported the Indians’ right to retain their ancestral lands. And since these disagreements were between the United States and the independent Indian Nations, the case was heard by the Supreme Court. Under John Marshall’s influence the Court narrowly ruled that the Cherokees were a sovereign nation and as such, the state of Georgia had no authority in Indian affairs. Unfortunately, the ruling did not prevent the United States Government from initiating the removal of the Indian nations to the West. President Jackson wrote to his friend and confidant John Coffee that “the decision of the Supreme Court has fell still born, and they find that they cannot coerce Georgia to yield to its mandate.” In other words the Court’s opinion was moot because it had no power to enforce its edict. Soon government agents were dispatched to the Indian Nations to negotiate treaties of removal in exchange for lands in the newly designated Indian Territory, consisting of present-day Oklahoma and small parts of Kansas and Arkansas.

The Cherokee Nation leader, Principal Chief John Ross, backed by the vast majority of Cherokees, resisted any attempt to negotiate a treaty that wasn’t the best possible one they could get. The Cherokee Council passed legislation making it illegal to sell any tribal lands without the Council’s approval. The penalty for violation was death. In 1835 a small cabal of mixed-blood Cherokees under council member Stand Watie went around the official tribal government and negotiated a separate treaty with the United States. In an attempt to expedite the treaty process, Congress regarded the Treaty of New Echota as the official treaty with the Cherokee Nation. Stand Watie and his followers achieved the wrath of the majority of Cherokees and the cabal’s leaders were sentenced to death by the Cherokee Council. Although Watie was able to avoid the sentence, many of the leaders were killed in subsequent years without legal reprisal. This division affected the removal, settlement and governance of the new Cherokee Nation in Indian Territory. The division was also significant during the Civil War. Between 1835 and 1840, nearly 18,000 Cherokees were moved from their homelands to Indian Territory on a series of expeditions which became known as the “Trail of Tears.” Uncounted numbers of Cherokees died along the way west. 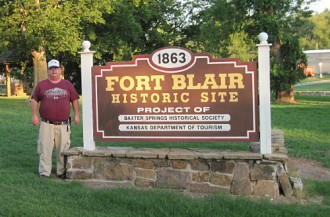 ABOUT THE AUTHOR:
MICHAEL J. MANNING is Chief Ranger of Fort Donelson National Battlefield in Tennessee. He began his history career as a volunteer interpreter with the Oklahoma Historical Society at Fort Gibson State Historic Site when he was a student at Northeastern State University in Tahlequah. Mike received a master’s degree in military history from American Military University. Prior to his NPS career he served in both the Navy Seabees and Army Military Police.