The Battle of Tupelo

View this issue’s Table of Contents

Maj. Gen. William T. Sherman’s army—or rather his army group—was on the move. In the first week of May 1864, his blue columns had left their camps around Chattanooga and begun the 120-mile march to Atlanta. Gen. Joseph E. Johnston’s Army of Tennessee stood ready, if not able, to halt the Union commander’s endeavors. Sherman’s 98,000 soldiers nearly doubled Johnston’s force of 50,000.

Johnston had no illusions whether he could stand up to the three Union armies as they entered Georgia from the north: a stand up fight was out of the question. What Johnston could do, and in fact did, was to maneuver when he could, fall back when he had to, and wait for his adversary to make a mistake. If he could take advantage of an error on Sherman’s part, Joe Johnston might be able to even the odds.

The Tallahatchie River at New Albany, Mississippi. A. J. Smith’s army crossed at the site of the iron bridge in the distance (no longer accessible). He was charged with keeping Nathan Bedford Forrest’s Confederate horsemen from raiding into Tennessee. Smith’s men camped here on July 9, 1864, and an Iowa soldier wrote of seeing men vigorously rubbing sand from the riverbank on their bodies to relieve the itch of chigger bites.

As the days passed Johnston was able to discover a flaw in Sherman’s plans, though it was not to be found in the red dust of Georgia, but rather in the hills of Middle Tennessee. It took a lot of food to feed an army of 98,000 men and even more to feed the tens of thousands of mules and horses that accompanied it. To keep the army in motion also took more than just hardtack and hay; ammunition, horseshoes, candles, telegraph wire and a thousand other items were needed to keep the campaign on track. The vast majority of this materiel came from Nashville by way of the single track Nashville & Chattanooga Railroad. Johnston surmised if he could find a way to break the rail line he could gain the advantage he sought.

Breaking a rail line was not difficult; two determined men with a pry bar could pull up a rail in 30 minutes of hard work. The same rail line could also be repaired in a like amount of time. The trick was to create such a vast amount of damage it would take weeks to place the tracks back in operation. To do this a large force of cavalry would have to appear in the rear of Sherman’s army and burn miles of ties and trestles while twisting and destroying the rails as they went.

Joe Johnston wrote to Lt. Gen. Stephen D. Lee, the youthful commander of the Department of Alabama, Mississippi and East Louisiana, and requested his assistance by dispatching Forrest on a raid into Tennessee. Lee agreed and on June 1, a 3,000-man column rode northeast from Tupelo, Mississippi. They were barely into Alabama when a frantic messenger caught up with Forrest with orders to return to Mississippi with all haste; an enemy force had been discovered departing Memphis headed for the Mississippi interior.

Johnston was not the only one who was aware of the weakness in Sherman’s supply line. Sherman was well aware of the threat and ordered Maj. Gen. Cadwallader C. Washburn to put together a force to protect the railroad by creating a diversion in Mississippi. The logic was simple: if Forrest was kept busy in Mississippi he could not destroy the tracks in Tennessee.

Washburn was the brother of the powerful Illinois congressman Elihu Washburne (who chose to add an “e” to his surname) and commanded the Department of West Tennessee with headquarters in Memphis.

General Washburn quickly threw together a mixed force of infantry, cavalry, and artillery and placed at its head the man personally selected by Sherman: Brig. Gen. Samuel D. Sturgis. Washburn was told to “Keep the enemy occupied in your district and press him at all points as far as your force will allow.” Sturgis’ orders were to engage Forrest “and if possible to whip and disperse his force.” 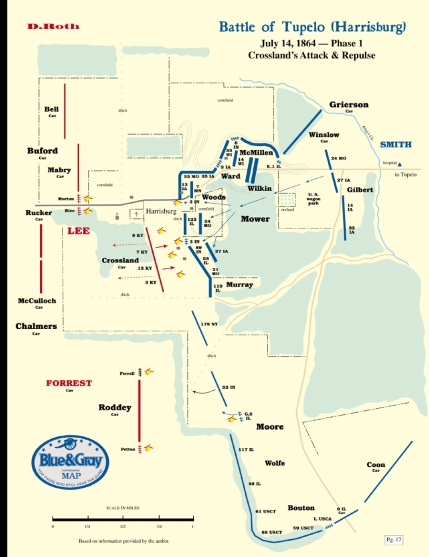 On June 2, 1864, Sturgis set out from Lafayette, Tennessee, at the head of 8,000 men while his opponent could barely muster 5,000. The overconfident Sturgis led his men south in the direction of Tupelo on the Mobile & Ohio Railroad. The march was slowed by rains which turned the roads to mud, followed by a relentless heat that sapped the men’s strength. By the morning of June 10 the widely separated Federal column was approaching an obscure little crossroads where the wily Forrest had set a trap for the unsuspecting Sturgis.

The Union cavalry, which preceded Sturgis’ main force, was engaged and fought to a standstill by the dismounted Confederate cavalry. Sturgis ordered his infantry to hurry forward and they double-timed through the oppressive heat and were exhausted by the time they reached the battlefield. Forrest had counted on this very factor and struck the Union line in a flanking maneuver which led to defeat and near annihilation of the superior force.

The Battle of Brice’s Crossroads, or Gun Town, as the Union called it, was Forrest’s masterpiece. His small command suffered a loss of 96 killed and 396 wounded to Sturgis’ 223 killed, 503 wounded and 1,800 taken prisoner. The Confederates also captured 16 pieces of artillery, 186 wagons, 16 ambulances, and enough ammunition to fight another battle. It was an incredible victory against great odds and added to the aura of invincibility that surrounded Forrest and his men.

Though few would admit it, Sturgis’ tactical defeat was a strategic victory for the Union: Forrest was kept busy far from Sherman’s supply line. This “victory” though was a brief one, and in order to keep the Confederate cavalry in Mississippi another effort would have to be made to keep them there.