Editors Letter: The Campaign and Battle of Tupelo 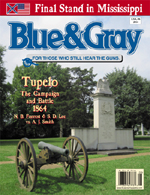 The following is the Editor’s Letter from The Battle of Tupelo, Volume 30, #6

The Campaign and Battle of Tupelo (or Harrisburg), Miss.

This is an interesting campaign full of twists and turns, revenge, military trickery, displays of incredible human endurance, command disputes with high-drama obstinacy, bungled assaults, new characterizations of an oft-ignored Union commander (and his oddly named troops), and a new perspective on the purpose of the campaign—one that includes the consummate Southern cavalryman Nathan Bedford Forrest.

On June 10, 1864, one of the greatest Confederate victories of the war occurred when Forrest and his redoubtable horsemen whipped a force twice their size at the Battle of Brice’s Crossroads, Mississippi. The casualty rate was an amazing 5-to-1 in favor of the victors (mostly by capture: 1,800).

Another redoubtable individual connected to Forrest and Brice’s Crossroads is historian Ed Bearss. In 1979 he wrote a book about the battle, and 20 years later he wrote a feature on it for B&G. One can gauge the greatness of actors on the world stage by comparisons of them to other great actors. In so doing, Forrest’s name has become linked to the “Desert Fox,” the great World War II German commander Erwin Rommel. Bearss dismisses as “folklore” the notion of Rommel ever going to Mississippi to study the battle. Still, the historical comparison has been made between Rommel and Forrest and it endures (a novel has even been written about Rommel visiting Mississippi for that purpose).

Shortly after Forrest’s stunning victory over the forces of General Sam Sturgis at Brice’s Crossroads, another expedition left Memphis with the purpose of dealing with the “Wizard of the Saddle,” as Forrest was known. Commanding this attempt was Andrew Jackson Smith, an otherwise nondescript general who had never been defeated on a battlefield.

The Campaign and Battle of Tupelo (or Harrisburg) has languished in obscurity for the last 150 years, despite Forrest’s name being attached to it. However, it has received some notoriety in recent times. Ground at Old Town Creek, part of the Tupelo engagement, has been acquired and historical markers erected. Tupelo now has interpretive legitimacy being linked with Brice’s Crossroads and having its own exhibits in the expanded and renamed Mississippi’s Final Stands Interpretive Center and Battlefields in Baldwyn.

The man with the new perspective, and a new book, is Tom Parson of the Corinth Civil War Interpretive Center, a unit of Shiloh National Military Park. This is his third feature for B&G. Tom is fast becoming an authority on, and the go-to guy for Civil War action in northern Mississippi and the struggle along the Mississippi-Southwest Tennessee border. His feature on Holly Springs remains an authoritative source on Van Dorn’s December 1862 raid on Grant’s supply base for his campaign against Vicksburg. Tom’s feature on Davis Bridge, Tennessee, an action in the aftermath of the Battle of Corinth, Mississippi, is the only in-depth account in print.

From: Editor's Letter
← The Battle of The Crater
Bermuda Hundred Important Tour Information →
No comments yet