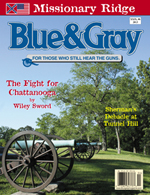 Volume XXIX Issue #6 • An Excerpt From:

Amid the eerie stillness of sunrise on the morning of November 25, 1863, a Union private contemplated the prospect of battle that lay before him. “[A] soldier intuitively knows that he will soon be called upon for bloody work,” he wrote nervously. With an uncertain fate staring him in the face, he thought of God, for “the Almighty Hand holds our lives,” he noted. Amid the surrounding men of his unit many were, indeed, thumbing through their pocket bibles, silently offering a prayer for mercy in the coming fight.

Yet, there was heavy irony in this scene. There were no specific plans to use these soldiers of the Army of the Cumberland in the pending battle at Chattanooga, Tenn. They were seemingly so many outcasts, victims of their recent huge defeat at Chickamauga, and apparently all but ignored in the plans of Ulysses S. Grant to attack and destroy the besieging Confederate army of Braxton Bragg.

The day wore on. The impatient soldiers of George Thomas’ Army of the Cumberland watched a few thin clouds drift by in an azure sky. By mid-morning the sky was completely clear, noted a bored infantryman, and the tedious watching and waiting continued. 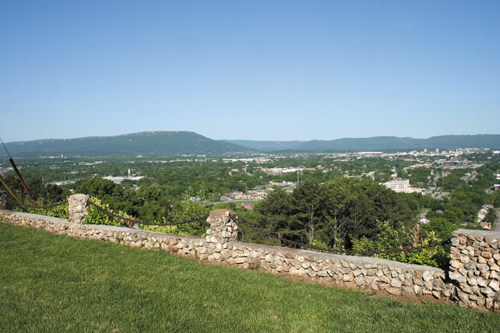 For Union Maj. Gen. George H. Thomas’ soldiers it was a peculiar agony. The raw emotions of awaiting battle, yet believing they were not to be a part of the grand movements underway, caused many to feel useless and impatient for action of some manner. The booming of the cannon to the north, and the glint of gun barrels in the bright sunshine on Missionary Ridge immediately to their front, had the men abuzz with indignant chatter. One sergeant counted through his field glasses a total of 32 enemy cannon arrayed along the distant crest of Missionary Ridge. Still, there were no orders to move. “The day was passing; the sun had reached its zenith, and was rapidly moving . . . toward the west,” observed an idle officer. “Impatience was marked on every face.” Where was this unpromising situation leading? As steeped in the immediate past, this unfolding story of despair and destiny involved a drama as huge as the unforeseen fate that awaited nearly all in one of the truly most auspicious days of the war. 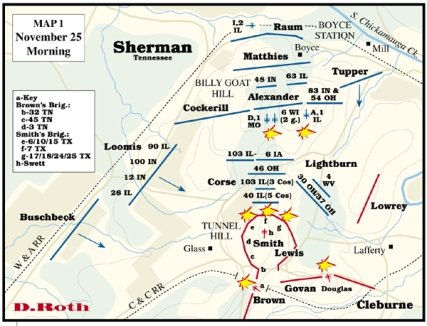 Chattanooga, Tenn., even in the darkest hour of its military occupation during the midst of civil war was compellingly unique. Surrounded on all sides by imposing mountain heights, the 25-year-old industrial town stood stark and grim amid its setting of natural grandeur. Despite a pall of sooty smoke that often obscured the city and the surrounding valley, the Chattanooga region in the fall of 1863 offered a vast panorama of breathtaking beauty.

The semi-circle of mountain ridges and towering peaks overlooked a huge bend in the Tennessee River known as Moccasin Point, while imposing Lookout Mountain, 2,146 feet above sea level, dominated the scene only three miles from the town. Yet beyond the carpeted timber and farm land of Chattanooga Valley to the east was a majestic barrier ridge. Missionary Ridge, also about three miles distant from Chattanooga, rose irregularly some 600 feet above the town, stretching for about six miles from Rossville Gap on the south, to the ridge’s terminus northeast of Chattanooga at Tunnel Hill, where the Chattanooga & Cleveland Railroad passed through the ridge. Beyond Tunnel Hill, the mighty Tennessee River flows through a rolling timber land graced by a series of lower hills and knolls. In all it was an imposing sight from the heights overlooking the city, one that compelled an observer to believe that he could finally view what a bird might see in flight high above the land.

Yet in merely a few months amid war’s desolate face, the grandeur had been compromised. Great wood and earthen shapes disfigured the once placid landscape as a network of forts and parapets jutted in stark focus amid the valley along the eastern and southern perimeter of Chattanooga. Fortifications existed in the place of once fine houses, which were torn down by teams of work details crawling over the terrain with picks and shovels.

In the wake of the stunning Union defeat at Chickamauga just over the state line in North Georgia on September 19-20, 1863, the Army of the Cumberland had stumbled back into the confines of Chattanooga a beaten and disconsolate army (Map, Pp. 8-9). The Federal army under the often brilliant yet erratic Maj. Gen. William S. Rosecrans was poised seemingly on the brink of an even greater disaster. Indeed, the events at Chattanooga in the weeks following Chickamauga had created one of the Civil War’s greatest dramas.

President Lincoln’s removal in mid-October of General Rosecrans, who it seemed was acting “confused and stunned, like a duck hit on the head,” had resulted in a major command shake-up and a crisis that went to the core of the military situation in the West. With the appointment of Maj. Gen. Ulysses S. Grant to command the Military Division of the Mississippi, which included the Army of the Cumberland, Lincoln sought, as he put it, “to move heaven and earth” to end the Chattanooga crisis with a major victory. Yet, remarkably, despite the high stakes, with victory in mid-America hanging in the balance, the story of the Chattanooga Campaign and the incredible saga of Missionary Ridge has remained over the years as one of the most overlooked and misunderstood of all Civil War events.

Today, many regard Chattanooga and Missionary Ridge simply as a part of the natural chain of events guided by that military mastermind, Ulysses S. Grant. Yet the reality was anything but ordinary or easy for Grant, or his men.

The strategic importance of Chattanooga in the war had been well noted. President Lincoln termed it a thorn in the Confederacy’s vitals—he said it was a city the Rebels simply had to have control of to contend for Tennessee. Significantly, it was Missionary Ridge, which ran along the town’s perimeter, that had been chosen as the Confederate army’s main point of occupation and investment of Chattanooga following the Battle of Chickamauga. In fact, it was the site where Confederate Gen. Braxton Bragg established his headquarters and opted to direct the siege.

It was reported that 42 pieces of artillery were captured by Union forces at Missionary Ridge.
Pictured here is a portion of them under guard.

General Bragg had been so confident of the ridge’s natural strength that no entrenchments were ordered prepared along the crest. Initially, it was supposed that this Missionary Ridge overlook would merely become the site where the Confederate army witnessed the Union army’s retreat from Chattanooga. Yet events from the end of September through early November had proved Bragg’s planning flawed. Despite Grant and his army being trapped in Chattanooga, with the Army of the Cumberland—now under the much revered George H. Thomas—being virtually starved and reduced to desperation, there were no signs of the Yankees leaving. There was a good reason for this.

Upon Grant’s arrival in Chattanooga in late October, he found the Army of the Cumberland immobilized. So many starving horses and mules had died there weren’t enough left to move artillery, or even bring vital supplies across the mountain roads from Bridgeport, Ala. The compound effect of a scarcity of food and supplies made the situation critical as November 1863 began. While an initial assault on Brown’s Ferry had opened the so-called “cracker line” on the night of October 26-27, Grant knew the breaking of the enemy’s river blockade of Chattanooga would take time to benefit from. Yet the substantial flow of food and supplies by riverboat soon enabled his further planning.

By mid-November Grant boldly sought to take the offensive, both to break the siege and also to wreck the Confederate army. Indeed, while his opponent Bragg was content to react to Grant’s moves, Grant was a commander who sought to manage rather than be managed by events.

The key to Grant’s plans was his trusted friend and subordinate since the days of Shiloh, Maj. Gen. William Tecumseh Sherman. By Grant’s insistence, Sherman had been appointed to Grant’s old post as commander of the Army of the Tennessee following his promotion to department commander. As the biggest part of the major Union reinforcements sent by the Lincoln administration to save Chattanooga, Sherman’s hardy troops were the victors of Vicksburg. In fact, they seemed to look with disdain on the elements of two other large armies now gathered at Chattanooga—especially the downtrodden Army of the Cumberland, now under Thomas, whose men were regarded as the sad-sack losers of Chickamauga. Also, Maj. Gen. Joseph Hooker’s Eastern soldiers from two army corps, the XI and XII, had been rushed to Chattanooga as reinforcements, but they were virtually held in contempt by Sherman’s men; they scoffed at these “paper collar” soldiers, resplendent with polished brass buttons, who couldn’t handle Robert E. Lee. “Our troops never have been whipped yet,” taunted one of Sherman’s boastful riflemen to the newcomers.

After marching from the Mississippi River to Chattanooga over the span of nearly a month, Sherman’s veteran troops were regarded by Grant as the main element for destroying Bragg’s Confederates. Particularly woeful, in Grant’s eyes, were George H. Thomas and his bedraggled, disgraced Army of the Cumberland. Grant viewed Thomas with suspicion from their days together at Corinth, Miss., when Thomas briefly superseded Grant in active command. Thomas, of the plain, phlegmatic personality, and the intensely aggressive Grant, were on opposite ends of the personality spectrum. Neither regarded the other with much pleasure or appreciation. In fact, Grant was embarrassed by Thomas’ situation at Chattanooga, and bitterly disappointed by his attitude.